skip to main | skip to sidebar

following strokes 2012-2014, then divorce 20116,my whole miniatues collection as misplaced.  The same da in2018 that theywere found I SUFFERED ANOTHER STROKE!  Growf!  Now maybe weeks away from going home again, I've begun painting agqin :0 If this reovery continues, I'll be back in battl by Christmas
Posted by Frankfurter at 8:07 PM 2 comments:

Instead of insurrection -- the common state of Frankszonia -- :)

I broke a leg in January. There were complications. I was forced into a nursing home for a couple of months until I managed to engineer an escape.
Then I came down with some sort of flesh eating strep infection.
The infection is under control, but it may be another two months before the wounds fully heal.
Interim, the leg is not getting proper therapy so it is not healing at a satisfactory rate.

While I'm still bedbound, I've discovered that all my gaming supplies have been relocated ... and are inaccessible to me right now (grr).
I'm floundering around with this old laptop to re-establish contact.

Computer is dying, so switched to laptop ... and lap top is not showing all my features!
:(

http://constantine-ii.webs.com/, is a new imagination "Herzogtum v.Rechsburg" which I'd hoped to add to the list ....

A
Posted by Frankfurter at 12:26 PM No comments:

Tidbits circulation in the Frankfurter market and barracks:

Oh, Stagonians brag, When they're deep in their wine
That Stagonian life is so very, very fine
That Gallians can keep
Their nasty goats and sheep;
A Stagonian will happily wallow with swine!

Given what he's taken for a wife, does Ludwig like his food also second hand?

Gallians are disgusting enough,
Beware a Stagonian with snuff ...

(the Ducal court denies that it has any part in disseminating such putrid humor).
Posted by Frankfurter at 8:17 PM 1 comment:

While it may be Christmas before I can resolve things in the current story line, the intent is to try BAR again (will have to reread the rules again, too! LOL) with very tiny forces on the table.
A few squadrons of cavalry each, a couple of battalions of infantry each, and only the light artillery.

and of course a man to figure scale game for the "kidnapping" attempt ...

Intendent Bastille had strolled into town to take his morning coffee and there met L’Comte d’Beauphaup. As they walked back out the gates to the Gallian stonghold, d’Beauphaup wondered how the Soweiter League was going to take the violation of Offenbach’s neutrality.
Bastille winced internally and casually asked what violation could the good count mean?
“We’ve intelligence that the 5th Porque Line and the Libbenstal Dragoons intend to use their crossing of the Main to move around the congestion around your depot,” the count answered.
“We’ve no such units in the Gallian Army,” Bastille protested.
“Really?” the count asked. “V. Mack reports than his team has intercepted their advance men in the Offenbach outskirts near our batteries.”
“But, we have no such units!” Bastille protested.
“Interesting,” the count responded nonchalantly. “We thought that they were another batch German recruits as only their officers spoke any French, at it was pretty vile .... Oh! Excuse me, m’Lord, I must intercept those flower carts I promised Madame V. Kern an excellent selection for today.”
Bastille strode purposefully back to his office. As he passed the guards at the door, he caught the eye of an ensign. “Get contact with Maistre Pierre,” he commanded brusquely and climbed up to the chart room, where he began spreading out local charts. Lt. Legume stepped helpfully forward and was handed an hastily scribbled note for Gen. Chevert.

Meanwhile, in the fields northwest of Frankfurter, the parish of St. Gertrude was being swiftly transformed into St. Gertrude of Jesus. Nice new statues were added to the graveyard and the nave. Close inspection might reveal that they’d been painted so swiftly that bugs were stuck on them. The congregation was in an unusual state of excitement. Even though few of them were really Catholics, the presence of the polite and healthy young advanced seminarians undergoing some field work experience under Fr. Umlaut was causing some comment. Even the local Anglerican circuit rider was jealous.
To placate him, Fr. Umlaut promised to take some Protestant men in to study Rubrics too. This may have been a mistake as the local frauleins soon realized the later young seminarians were eligible. The Vespers services and benediction began to attract a small crowd.
Fr. Umlaut let it slip that he was looking for a good Mission team (Revival for Protestants) to better minister to the temporary crowd.
An Italian merchant who happened to overhear him at the inn mentioned that he might soon be meeting with an abbot who would probably gladly provide somebody. Fr. Umlaut was grateful, as the merchants usually pushed on through to Frankfurter. The merchant assured the rustic cleric that it was no problem. The merchant had simply been too tired and a little unwell and didn’t want to have to deal with the Frankfurter gate hassles in the late evening.
“Such an experience is bound to leave a Mark on someone,” the priest agreed.
“Well there’s marks and there’s Marks,” the Italian philosophized. “Some are easier to deal with than others. Most of them you can cover up.”
“Just so long as one doesn’t make a Habit out of it, “ Fr. Umlaut agreed. “Ah well, I hope you have good luck, friend. Alas, I must return to read my office before the light fails.”
The Italian toasted him with his stein and watched the priest amble back to the Rectory. Then he rose and went around to the stables where his servant was caring for the horses. “V. Mark is here,” he told the lad.
“For sure?”
“Yes, the priest tried to warn me. I suspect he’s being watched rather closely.”
“If V. Mark is here, then surely the Apostate is not far away,” the youngster enthused.
“That is quite possible,” the merchant responded. “Anyway,” he continued louder, “you need to take the mare out for some exercise tonight. Steer clear of all these military patrols, won’t you, I need the horse back in the morning, and it would be helpful you came back too.”
“I’ll do my best,” the lad grinned as the merchant returned to the beer garden.

A few moments later, he rode an aging mare out of the paddock and down the road. Soon After the road had turned around the hill, he came on an hussar who was inspecting his saddle straps. “Guten Abend!” he called cheerfully.
“Depends on how and to whom you’re bending,” the hussar joked as he straightened up.
“I’ll drink to that!” the lad responded, to which the hussar quickly produced a flask, took a swig and offered to share with “Proust!”
The lad thanked him and took a drink. As he handed it back, he apologized, “I didn’t mean to drink the whole thing.”
“The whole thing?”
“That’s my guess, I’ve got to find the good merchant’s train to give them their Marks.”
“On your Mark, then,” the Hussar responded. “I’ve to to get back to my billet too.”

As the lad rode on into the dusk, SomeRussian Guyovitch mounted and turned back towards the hunting lodge. Events were developing again.
Posted by Frankfurter at 7:34 PM 4 comments:

The room was small by comparison with others in the palace. Unfortunately, this made the lurid ostentation of the gilded, rococo furniture, the ornate frames of the erotic paintings, and the excessive folds of burgundy drapes even more overly lush. King Ludwig set his goblet (the stem being a statue of an orgastic dancer from some vile Greek rite) down on the small round of bluestone within the ropes of gilded ornamentation of the table and asked, “Andrew Kern? The order is sure?”
A portly courtier whose face hid behind bushy cheek beards and mustache grinned. “The last witness to our little escapades in the hunting lodge, Sire.”
“He’s an, ah, irritation,” the king continued, “and must be scratched. But why should we be concerned with Prince Allbrick? He’s illegitimate, disowned, and apostate. We can’t even use him ourselves.”
A tall courtier in riding clothes responded. “He was the eldest, Sire; and there’s a rumor that Stanken plans to acknowledge him and give him an auto-de-fe reconversion. That’d put another cavalry genius and skilled plotter in place as Prince Regent should the Hurtshog not recover from his unfortunate wound.”
“That’s another irritation!” the King snapped. “How could Herr Badspielman miss? We’d gotten him placed right beside that bloated bum as an aide!”
“It seems that the swollen sausage is very agile and slippery when riding into a charge, Sire. We’re lucky that the Frankszonians didn’t realize that it wasn’t just a battle wound.”
“Too bad about Badspielman, though,” the portly courtier shook his head. “Why did he let himself get carried so close to an infantry formation?”
“He didn’t,” the rider responded. “That’s just where his body was recovered afterwards.”
A moment of silence followed as the two courtiers thought that a bullet could have been fired by more than just the public combatants. The king returned to his complaint, “Why must we risk an agent against this greasy Frankfurter? We’ve already lost an entire team in our last attempt on the Kerns.”
“His return of the things he took with him into exile is perhaps more important than his person,” the portly councilor commented. “A seal, a ring or two, and a very small scepter.”

(A computer crash erased the interesting byplay as Pederastein, the Portly Courtier, and King Ludwig continued their plotting. Alas, too ill to recreate it, but here’s a synopsis)

They will infiltrate Stagonian troops into the area around the hideout. After all, the Stagonians are already uniformed like Gallians and their attack would trigger a general Frankszonian uprising and destroy the Fhartzen standing with the Gallians, and thus remove them from rule. Such deceitful tactics were deemed vile enough.
This attack, however, is a cover for another plot. Originally, they’d planned to kidnap and kill the Urpprinz and frame Allbrick and Andrew Kern for the deed. This was altered, though, when they realized that it might be too vile ... and arouse an horrible coalition against them if exposed ... which would create the kind of political community of minor princes which Frankszonia had been advocating as a response to the pressure of the greater powers. Therefore, they decided to make the attack on the Urpprinz a cover for an attempt to steal the Urpprinz’s treasure box. There was information that the items brought back by Allbrick were kept there under the guard of two large black Turkish warriors.
Thus they will vilely deceive the Fhartzen and Kerns into destroying themselves!
Posted by Frankfurter at 10:54 AM 5 comments: 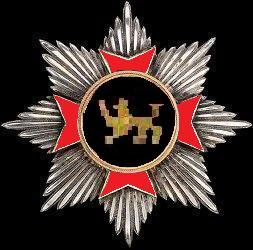 Ancient and Honorable Order of the Tankard Honors from Duchy of Harzburg

Order of the Golden Crown

Order of the Goblet